Cubet is now an Exclusive APAC partner with Laravel 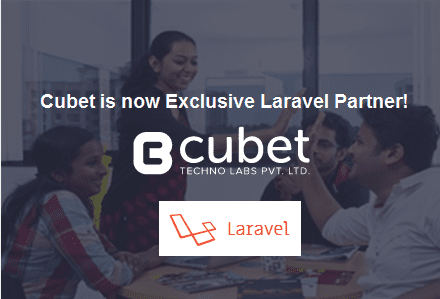 Cubet is proud to announce its exclusive partnership status with Laravel. Through this exclusive Partnership, Cubet provide another opportunity to lead to next level, and we hope to help our clients more and more, as we will now have Laravel Community support, encouragement and Code-base for laravel APPs Development.

“ It is indeed a proud moment for team Cubet”  stated Lovegin John, CEO of CubetTechnolabs. We’re honored to have this opportunity to be part of the Laravel Partners program.  One of the major reasons why Taylor reached out to us personally and chose us as a trusted development partner from Asia is because they know that we hire only the best of the best”.  We will continue to provide notch Laravel development and consulting services in the coming months, says Lovegin.

A bit of history Back in 2011, CodeIgnitor was one of the most popular PHP frameworks and it had a large community of supporters. But Taylor Otwell, the man behind Laravel pointed out certain flaws in CodeIgnitor which was critical for building web applications, leading to the development of Laravel version 1 which was released on June 9, 2011. Laravel since then has been ever growing with thousands of developers, catering them in building high end applications and it has come a long way with several releases embracing latest features of PHP 5.3

“This is another golden feather to the cap of Cubet”. We have been working with Laravel since 2011 and our years of hardwork have paid off. It’s a great breakthrough for us to be part of the Laravel and open source communities and we will be dynamically participating in all upcoming activities and conferences. Cubet has emerged as the industry leaders of enterprise web and mobile application development in a short frame of time and now we are proud that our growth has allowed us to craft new opportunities for advancement of our client’s digital dreams to perfection.”

With over 150+ developers (30+ developers on Laravel alone), Cubet has been focussed on contributing to the community as well and creating cutting-edge solutions using niche server side and front-end technology stack including Vue/Node/Angular/React/Meteor as well as Native/hybrid mobile application development using iOS/Android/React Native technologies. With most of their applications requiring scalability, they have ensured high redundancy and flexibility by hosting over 200+ of their applications on the cloud. Our team of top-notch Laravel developers will build product, help to take it to market, and iterate with change. We work with big enterprises, small-to-medium sized businesses, and early-stage startups to devise, design, and deliver world-class applications that are loved by users and developers alike.

We are tireless advocates for the Laravel ecosystem, and we’re proud to be a part of the Laravel Partners program.