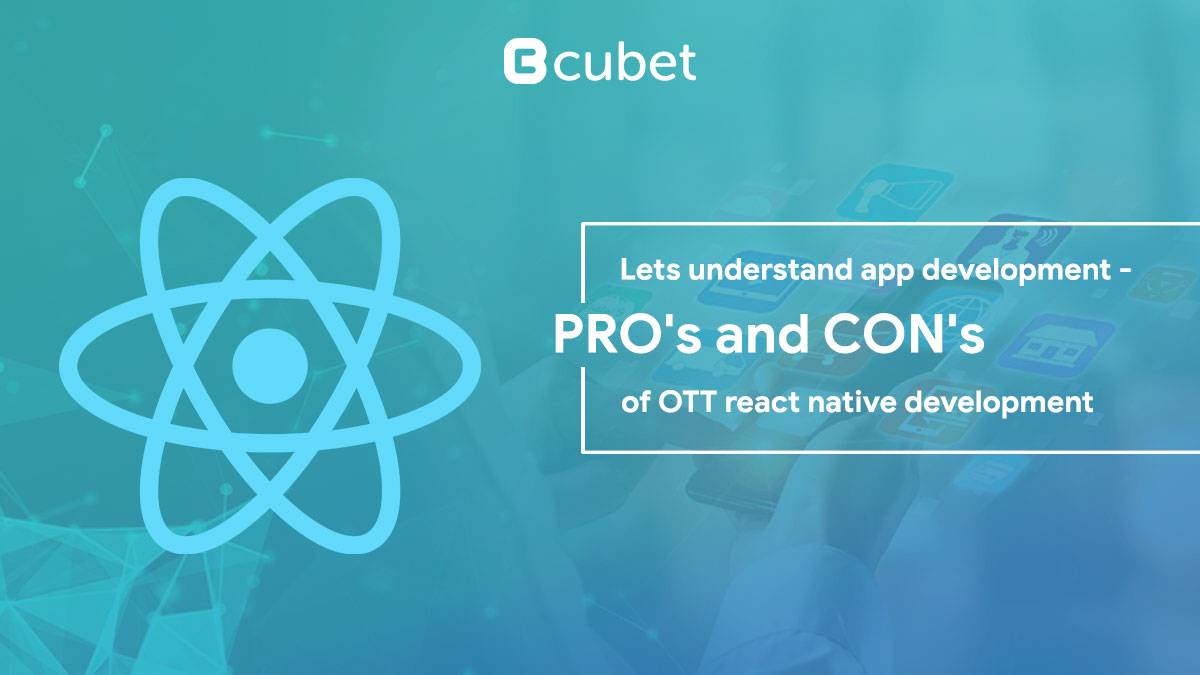 The global OTT market size was valued at $121.61 billion in 2019, and is projected to reach $1,039.03 billion by 2027, growing at a CAGR of 29.4% from 2020 to 2027. Building apps that rock on iOS and Android platforms is a dream come true. Because these platforms support a whopping share of the user base. However, there are prolonged timeline development costs accompanied by several technical issues and heavy expenditure.

What React Native does is, reduces the costs, technical challenges, and waiting period at a phenomenal level. Being one of the most popular solutions for cross-platform app development complexities, React Native is the best strategy for developing OTT apps. However, finding a deep fragmentation in the OTT space, media brands must allow giant and popular platforms like Android and iOS to build apps like Chromecast, Roku, Apple TV, Amazon Fire, and Xbox.

The blog gives a deep eye into some of the biggest benefits and drawbacks of OTT React Native App development and also identifies why it plays a vital role for today’s OTT brands.

React Native is a very popular OTT cross-platform app development solution. With its high speed, flexibility, and reliability, mobile app developers prefer it over other frameworks. Every developer who builds apps on React Native needs to create only a single codebase that works across all devices and platforms you wish to target.

With cross-platform app development, it becomes possible to place the apps on different platforms by operating a single codebase. This is so hassle-free against building the same app using old native technology for all platforms. And that is why media enterprises are now focusing on developing OTT cross-platform applications that benefit their budgeting and allocation. They do not have to spend huge money on hiring development teams.

However, every coin has two sides. Similarly, React Native has its own pros and cons. Let us quickly look over them.

React Native creates the best of both worlds. It flourishes on its own by being an open-source project. It is strongly backed up by a giant tech organization like Facebook. Most app developers get lured by the features of this open-source framework. However, building apps here needs a huge amount of skills and a crazy mindset. The community is built up with a great talent pool who have excellent coding skills and can create tremendous applications within this framework. And that is why even a beginner developer doesn’t have to worry about addressing technical issues while developing apps.

With native app development, developers need to write separate codes for every platform. But with React Native Development, there is one code that can be reused for every platform you expand to. It has flexible modules that are highly customizable. These modules can bridge the gap between areas of code and allow your mobile app developers to share various platform functionalities.

Native app development becomes quite expensive for each and every platform. However, React Native developers know what it takes to program for every platform, but can make the app-building process faster and more cost-efficient. You can perform resilient apps without having a team of coding experts for each version. All you need is one team of skilled experts to manage everything.

The benefit of building apps with native app development is that it widens your audience reach. Along with this benefit, what comes is spending a lot of time designing every single native app. On the other hand, with React Native app development, your apps will get to market sooner and you will earn higher revenues in less time.

Failure in Working on Roku

The React Native will not function on Roku. This is because Roku needs its own OTT apps to be built by using SceneGraph and BrightScript and their proprietary programming framework and language. This may not be the end of the world for a few brands. Roku is trying its level best for acquiring a leading position in terms of covering a wider user base.

If you are looking for a choice for creating a mobile app, React Native is the best and most advanced choice. It can perform quicker and skillfully on all kinds of projects. Eventually, the mobile app developers keep launching new framework versions that may not agree with different dependencies. And that is why React Native requires a team of tech-savvy professionals who update and maintain the process as per the current development trends.

Lack of Customization in UX

The codes of React Native App development are designed for all kinds of devices and platforms. This takes away the option of tailoring the apps as per the business needs sometimes. In such cases, you will be unable to harness all the features of React Native into your app.

Does it Really Get Cost-effective by building an app with React Native OTT App development platform?

There are different views on this question. React Native apps are cost-effective at those times when you want only one code and get it deployed everywhere. However, this may not hold true in every case. Practically, when you need different kinds of features for different platforms, then this sort of solution may add more complexity than simplicity.

For example, the mobile app developers who work on the project get completely oriented about the project before the development process. They understand the entire purpose and the holistic framework that is needed to build apps in React-Native. Such skill sets are rarely found in the developers unless they are trained in specific programming languages. Secondly, when the code begins to span two, three, or six apps, there arise a lot of complications, leading to separation between the number of people who understand the whole system and those who just have become great experts.

Are you ready to Build your OTT App?

Cubet has a comprehensive team of OTT app development experts who have experience in building world-class OTT apps for some of the known media brands. Reach out to us if you wish to know how we create seamless mobile apps that rock on various platforms by using React Native app development framework. Get in touch today!