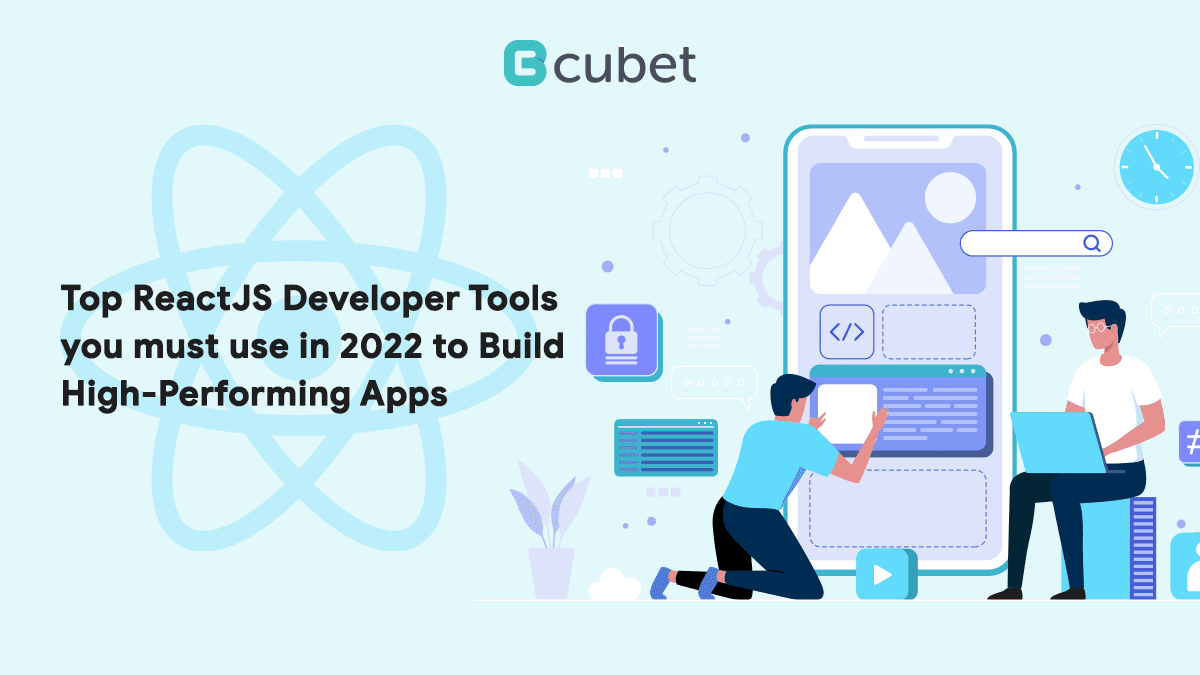 Embedded with a diversified range of design tools and multiple options, React JS is helping many developers worldwide to create rich and dynamic user interfaces. The platform makes proactive and powerful mobile and web apps every year for users. A survey done by Stack Overflow states react.js to be the second most loved web framework in 2020.

Moreover, particular research reports an increasing number of React.js users base within the same year 2022. In addition, 54.2% of users’ websites switched to the new version 16 soon after it was launched. What makes it so simple yet outstanding is the impact of React Developer Tools. There are around 30 to 40 React Developer Tools that have helped gain the wide popularity and reliability of ReactJs. The tools facilitate the engineers with several activities for the web app development such as visibility, debugging, and performance in addition to software creation.

Surprisingly, React is the framework that is employed by giant companies like Airbnb, Tesla, Skype, and others because of its diversified features. The blog delves deeper into a variety of React developer tools that make Reactjs a dynamic and most preferable choice for the companies. So let us know more about it.

What are React JS Tools and the reasons for using React Developer Tools?

To use React skillfully, the React team has officially released React Dev Tools with browser plugins for Firefox, Chrome, and many other browsers. These tools enable simplification of debugging and examining React apps. With React Developer tools, developers can write cleaner, stable, and robust codes leaving more time for other activities.

Building react apps with react developer tools is easier. Libraries, frameworks, code generators, testing utilities, and debugging extensions are a few examples of react tools. Before knowing some of the best ReactJs developer tools, here are some of the reasons why you should go for it.

Redux is an open-source library that got released just two years after React. It uses the concept of a data store to enable tracking of the state of the applications. In React you can share the data across the components, however, it becomes difficult to perform it with efficiency while building complex applications.

With this, you get direct access to all the components in the same stores. That makes it easier to pass the state between different parts of the application. By using Redux for simple applications, you can reduce unwanted complexity. If you are not equipped with more state data for store tracking, it takes a lot of work to build up a Redux infrastructure that can benefit you in the long run, unlike other tools. Lastly, it has a small size library as compared to other tools, hence making it a compact yet powerful library.

With complex components, React will help you create intuitive user interfaces. This utility offers a sandbox to create UIs that are different from your business logic. Sandbox is used to develop components as a playground. These sandboxes store components as stories. And hence the name Storybook. Each story has statistics. The visual test case is used for state comparison. The story is mainly a function generating value and is displayed on the screens.

React-Proto is an abbreviated form of the term “prototype”. Developers can build an application architecture from the base. Proto provides application files required for further development and developers begin with a visual design. Thereafter, it assists in defining ReactJs properties and states. The tool is perfect for React developers who like visual designing more than coding. It gives you access to create prototype user interfaces by drag and drop facility instead of writing code.

However, this does not mean you can develop the app UI without writing a single line of code. Instead, the developers get the prototype tools they want with the freedom to label all potential components from a picture by using React Proto. Thereafter, you can export all the components into auto-generated code once you have them all.

Developers use the Create React App tool to build a new REact app rather than spending time finding out necessary libraries and doing manual configuration. The newly created app comes with a clean folder structure for all the application’s files. Also, it provides React scripts to run and deploy the code. This too also makes it so easy to incorporate testing into the development process at an early stage.

Developed by Facebook engineers, this tool spins up an application that has a huge potential of doing much of the data-heavy calculations. It also renders on the front end.

The Next.js generator permits the developers to sign up to React applications that do rendering from either the client-side or server-side. By using server-side rendering, the application performs all the required calculations to finalize the display of the content to the user on the server. This is done before even sending the HTML page to the user’s browsers.

Besides, there are so many other advantages to server-side rendering. It is suitable for the way it performs as the front-end code mostly shows the static pages. Also, it sounds perfectly appropriate for SEO purposes as crawlers can find server-side code easier than client-side code.

Just like Next.js, Gatsby holds a good reputation because it is also suitable for creating statically rendered pages. However, Gatsby provides starting templates in a huge number. And that helps the developers to get preconfigured and unique styling choices for their React applications. These templates can also help developers get React applications up and running faster as compared to other generators.

React developer tools is an extension that shares compatibility with browsers like Chrome and Firefox. While using this tool in Chrome, the built-in Devtools inspector displays extra Components and Profiler tabs. The components tab displays the application’s component tree and permits the developer for object and data inspection at a stipulated time. The profiler tab also permits the developer to log complex interactions between user actions and the state of the application.

The tool is useful for the testing complex of React applications. If there is an error in the large REact application, it becomes difficult to find the thread of execution with the code. With this tool, it will be easy to dive deep into the data and start recording the actions to make debugging more impactful

The specialty of Enzyme is it does testing on the different parts of an application. These parts are known as components. Enzyme compares the expected value of components more efficiently against actual test results of Jest tool snapshots. The tool doesn’t need to take the data of the entire component tree. Rather only pulling the relevant component’s data would do. The library offers tools that can effortlessly search specific data within the component to speed up the testing process.

Reactide is an open-source IDE cross-platform tool. It has compatibility across Windows, Linux, and Mac machines. The key benefit of this tool is that it has its independence from the platform. You can load components without having to configure or build them in the browser. It provides readily accessible modules that do not need any manual configuration or external build tools.

The tool has an integrated node server, a simulator, and much more to let go of the reliability of the server settings. It represents the project architecture and provides visual editing capabilities.

This tool is a universal solution for creating reusable components. React Cosmos puts the focus on enhancing all aspects of React development even if it is small or large. It does component analyses and allows you to render them with any context, props, state, or anything you want. For running instances, it connects to allow seeing the change in applications over the period. With React Cosmos, you can enhance the component design with surface dependencies. All you need is to define your sane component inputs to make the debugging and UIs more predictable. Over and above, it allows you to construct UI component libraries and develop React components.

Why hire a remote dedicated ReactJS developer team in India?

Recently, India tops the chart among the best hubs for IT organizations. The country is blessed with abundant talent, skill, experience, and cost-effective IT resources. Among several reasons to hire a remote dedicated React JS developer for your web app development project, here are a few you must know to have a clear insight.

We hope after knowing the above 10 best React js developer tools will help you to build a cleaner code now. These tools have all that is needed, from browser extensions to libraries with all APIs to graphical UIs for making React apps. These tools allow the developers to build robust and scalable codes along with speeding up the development process. We hope these tools will help you create, debug, manage, and document apps easier than before. In case needed, you can combine these tools randomly according to your requirement.

At Cubet, we have a React JS development team that has proven knowledge and experience with powerful React developer tools. We boost the app development cycle and help you build your web and mobile applications in a shorter time span by providing end-to-end web app development services. Share your ideas with our experts. Connect with us now!