Software Developer v/s Software Engineer: What’s the Difference & Who Will Fit You Best 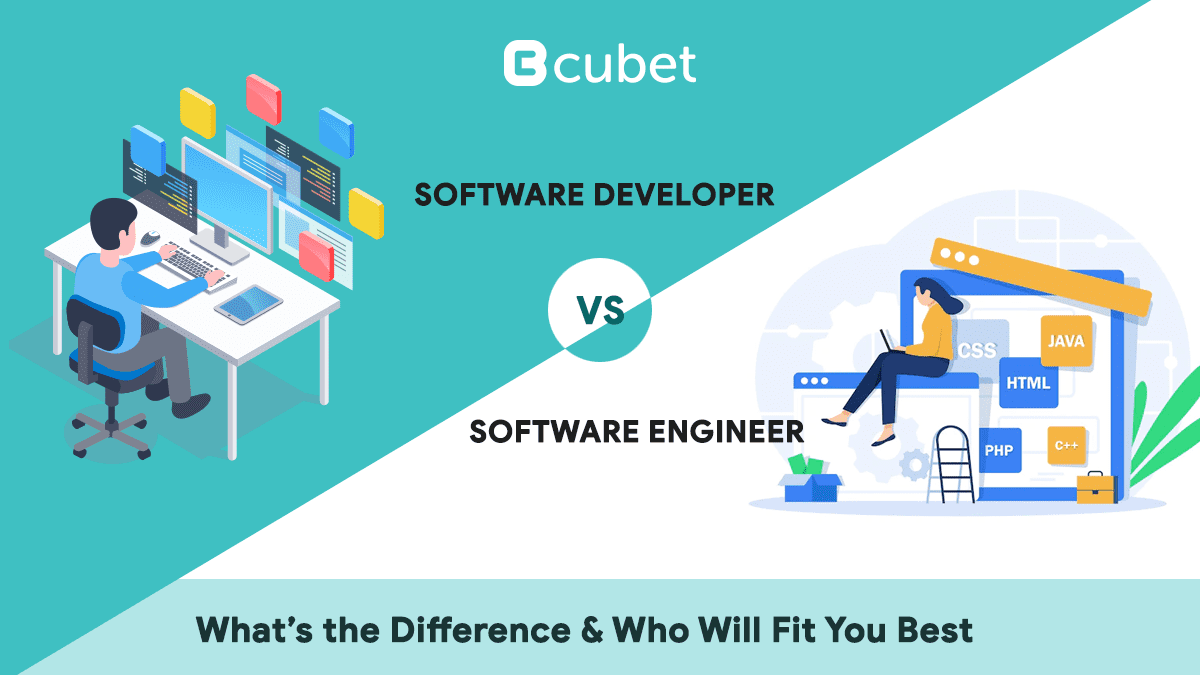 The average spending on enterprise software is expected to sum up to around 675 billion US dollars across the globe by 2022. That is 11% percent growth as compared to the previous year. In 2019, there were around 23.9 million software developers worldwide.

In 2021, the software engineer role was the most sought-after professional in the market. By 2030, it is estimated that 45 million people worldwide will be working as software engineers. India will be the country with the largest software developer population in 2024.

Experts tell us that these two jobs are completely different in terms of their functionalities. From having a thin line of difference to standing farthest apart from each other, both the positions have their unique role and responsibility. The blog helps you learn more about these two jobs and helps you find out which one suits the best as per your business needs.

Let us head over to the details.

Who Is a Software Developer?

A software developer is a tech specialist who provides software development services and  who designs, develops, and builds mobile and desktop programs. They also create different kinds of web and mobile applications. They are basically driven by a creative force to design and program implementation. Recently, they are in high demand due to the infusion of technology in all kinds of businesses and the demand for process automation.

Generally, they are responsible for the complete development process. They do client collaborations to make theoretical designs. They are also responsible for documentation and testing client software and writing code for developing apps. These apps may either stand-alone or amplify access to servers and services.

Top Skills of A Software Developer

These are the most required skills in a modern software developer. They must be familiar with the basic data structures, like linked list, an array, set, and map. Consider the fundamentals that they should know for building apps.

Most companies use Git and GitHub source code management. This is a hard skill that is essential for software developers.

They are highly skilled in cloud computing. This skill is in foremost demand because of its cost-effective approach. Tech specialists having proficiency in Google Cloud Platform are in high demand this year.

It is not just about knowing the programming languages and databases. Software developers must know source code editors like Visual Studio Code to debug, code refactoring, and syntax highlighting

In addition to gaining progress out of position, experience and knowledge, the developers must dedicate the time to build their skill set on a daily basis, do code analysis with a sharp eye, and keep looking for opportunities.

This is the first thing every recruiter will look through to understand the developer’s skills. A portfolio will be useful for showcasing the experience and source code before inviting them for an interview.

This is a place where developers talk about their achievements and their readable code writing ability. In addition, the number of followers and amount of repositories also can create an impact.

Developers can showcase what they think, write and communicate during their coding life. It gives a better understanding to the reader of their working style and the amount of pressure they undergo.

These are the most important best practices for software developers.

Who is A Software Engineer?

In addition, software engineers need to make sure the desired program interaction takes place with the chosen hardware. By application of mathematical analysis and computer science principles, they design and develop computer software. They operate on a larger scale as compared to software developers.

Top Skills of a Software Engineer

The most experienced software engineers know at least one or two programming languages. However, nowadays they need to be skillful in almost all kinds of languages to get lucrative job offers. The most sorted skills that anyone would look in a software engineer are

It stands almost similar to the points that have been discussed for the above topic on the software developers. Because, for both jobs, there is a need for a deeper understanding of codes. In addition, there are several other aspects that are tested and analyzed to identify the potential of the software engineers. They are linear data structures, algorithm analysis, and computer science fundamentals.

Roles and Responsibilities of Software Engineers and Developers Combined