Program Your Lifestyle! : A CSR initiative from Cubet Techno Labs 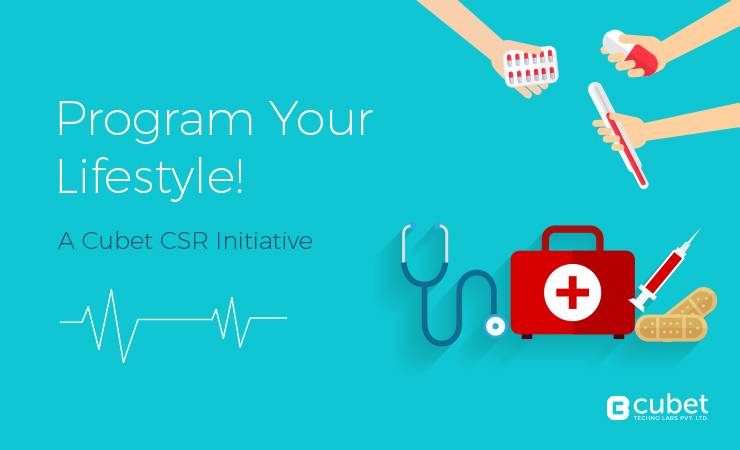 Something exciting and inspiring took place on May 4th, 2016 at Infopark, Kochi when Cubet Techno Labs’s CSR Club hosted a Free General Health and Eye Checkup Camp in association with Amrita Institute of Medical Sciences for the corporate employees working at Infopark, Kochi. The event was powered by one of the biggest Fitness Applications in UK, Bounts Limited. 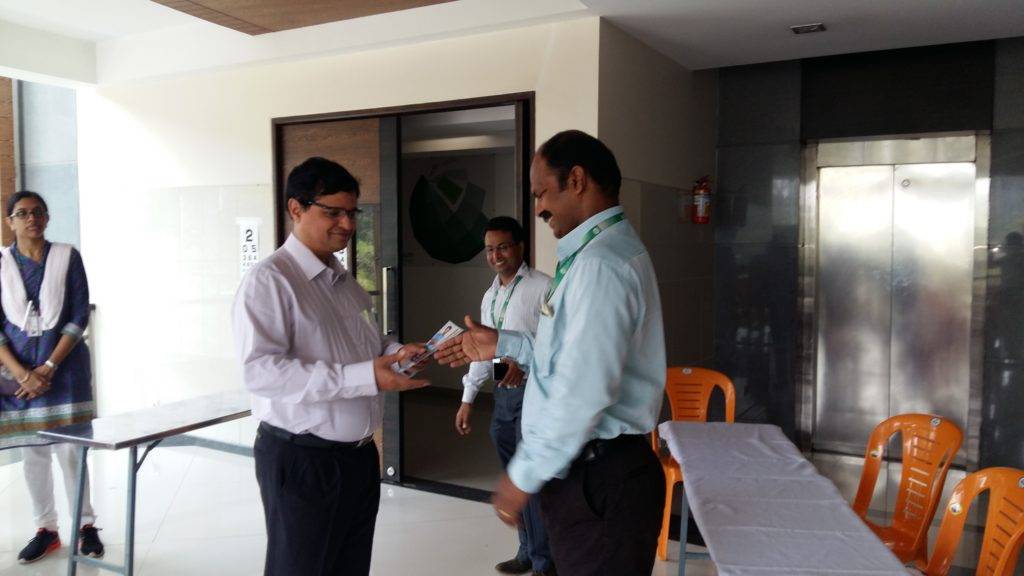 From its inception, Cubet CSR club has been organizing frequent events with the idea of connecting the techie community to the society in a way or the other.  The alarmingly increasing health problems among the techies prompted the CSR team to conduct the Medical Camp. Lifestyles of IT professionals generally tend to be hectic, challenging, full of stress, at times fun…A study conducted by a wellness firm in Technopark, Trivandrum has found that a large number of techies have complaints of body pain, carpal tunnel syndrome, sleep disorders, even some have stress-related behavioral problems and other lifestyle disorders, all at a very young dynamic age. It is high time, we need to educate the techies the importance of adapting one’s lifestyle to tackle these issues. 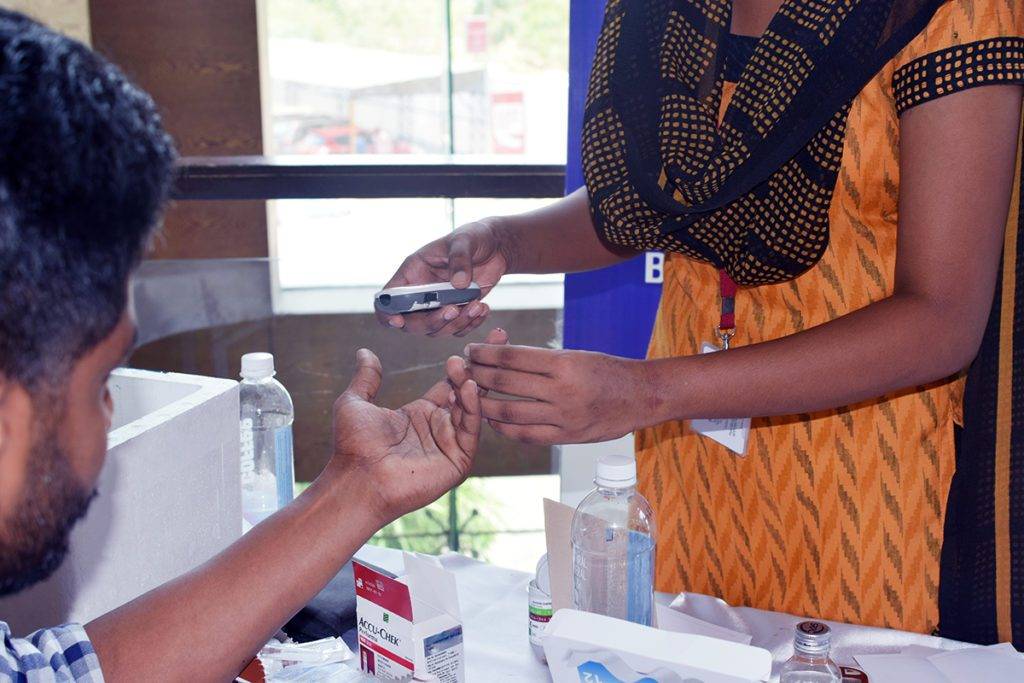 The plan for the Free Medical Camp was put forward by Mr Sivaprasad in a monthly CSR meeting, it sounded interesting and the CSR club made the decision the very day itself to conduct the event. From there, it was a team effort where all the CSR club members joined together, divided the tasks among and started working. Identifying a right Medical group was the biggest challenge and we managed to associate with Amrita Institute of Medical Sciences, Kochi which is one of the largest Medical University in the country. 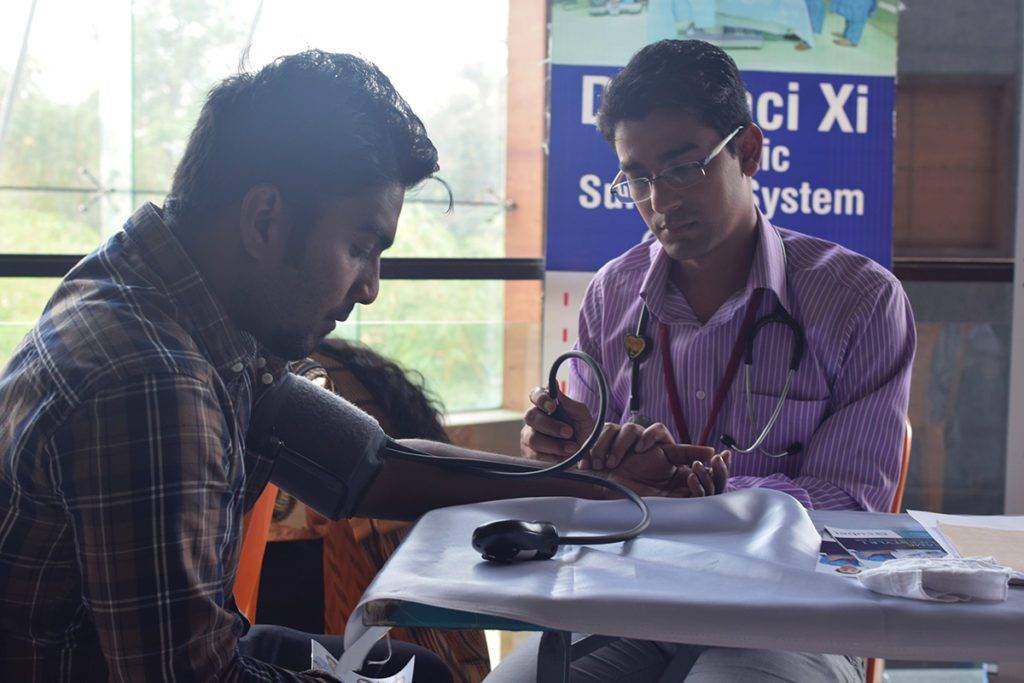 Since it is an event to be conducted among techies from different corporates in Infopark, we were very adamant on the approach towards the event, we wanted everything to be managed in the at most professional manner. By the 3rd week of April, we started the promotional activities where invitations and registration forms were sent to all the companies to the event. As it was a single day event, we had to limit the number of intakes and therefore we made arrangement for pre registrations. Another challenge we faced was the volunteering of the event, we had allotted token number and consulting time to each of the registrant and we needed volunteers to coordinate among the hospital authority and the techies who made their registration to the Medical camp. An announcement was made within Cubet for identifying the right volunteers. In a short notice, we were surprised to see the number of colleagues who step forwarded to volunteer the event. We raised a request to the management to get them off work for some time and we divided the volunteer teams and allotted time slots for each. Valuing the importance and taking into consideration of the good will behind this event, despite the tight schedules the management wholeheartedly agreed to the idea.The CSR team worked around the clock and spent the previous night at the office premise for making the necessary arrangements. 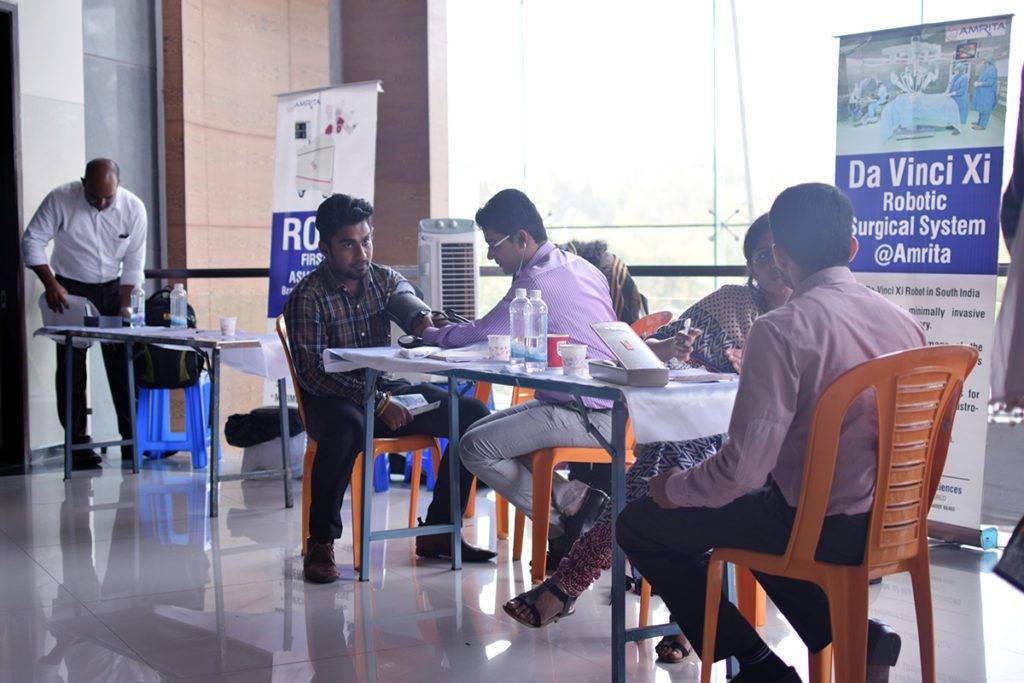 During the day of the Medical camp, by 9.30 AM itself 2 general physicians, 2 eye specialists, 2 dieticians, 3 nursing staffs and a coordinator from Amrita Institute reached the venue.  There was a very short inaugural ceremony where our CEO Mr Lovegin John and Carnival Infopark MD Mr. Raj Krishan officially declared the inauguration of the program with a brief speech on the importance of a medical camp among the techie community. 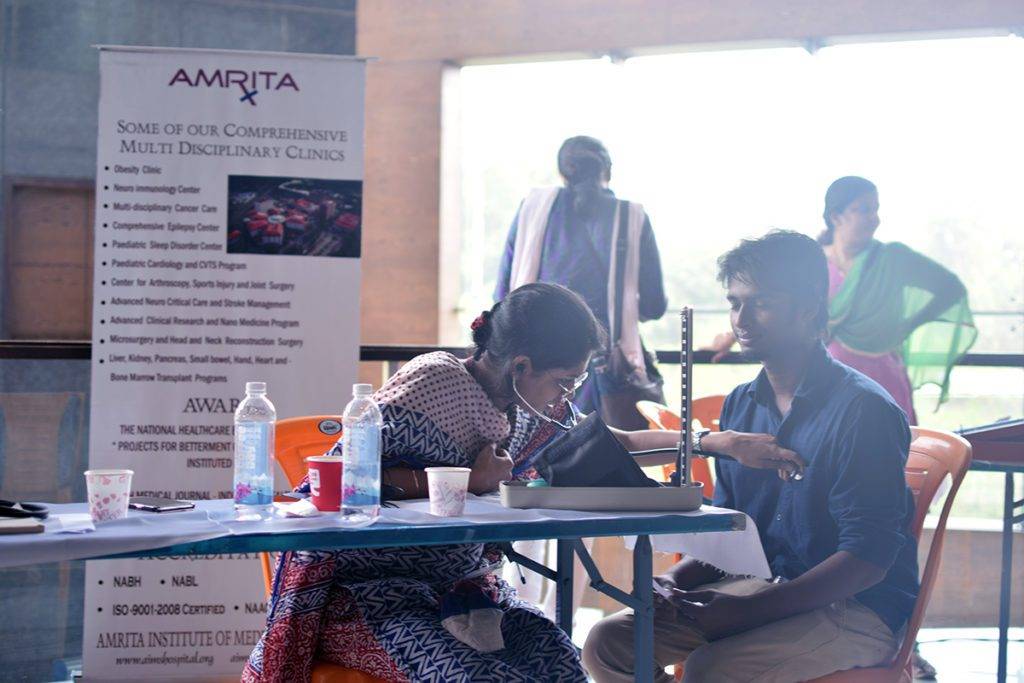 The response from the Infopark community towards the Medical camp was tremendous, 140 registrations were taken for the event and the camp turned out to be a grand success as the registrants all turned out on the expected consulting time. The way the camp delivered was way beyond our expectations. 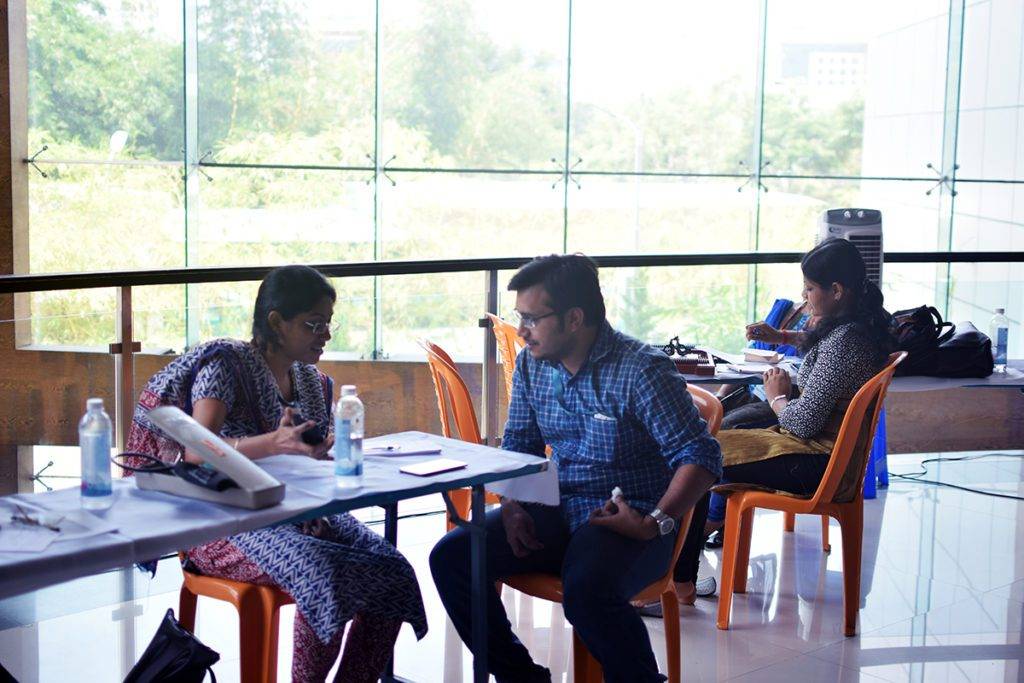 For each of the registrant, detailed general  health care checkup and Eye Checkup was conducted. BMI, Blood Pressure, RBS and Heart Checkup was analyzed.  The doctors spent considerable amount of time with each of the registrants, analyzed their lifestyle, diet pattern and any other health issue that they faced and gave valuable insights on the ideal diet pattern and lifestyle to follow with some fitness tips. We had compiled an  health guide booklet based on an elaborate research done on the IT healthcare concerns and was distributed among those who participated in the program. 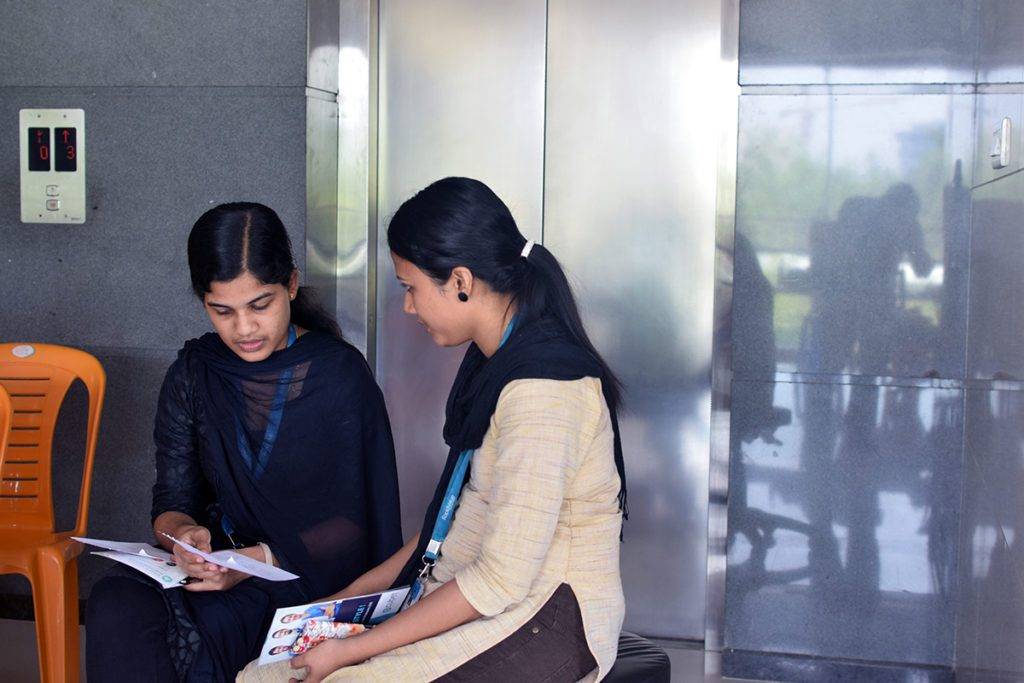 We managed to wind up the event by 5 PM as previously planned. We were keen to know the feedback from those who participated in the event and followed up with a feedback form. The responses were amazing and truly touching and I’m certain that this alone can fuel the CSR group to come up with many more ideas that could be turned into socially relevant events.

As the CSR club president, I would like to thank, Amrita Institute, Bounts UK, last but not the least, my entire CSR Team mates, colleagues and the management for their wholehearted support, without your assisting hands, we could not have made it what it turned out to be.  Thank You !