GET READY: A NEW V8 IS COMING, NODE.JS PERFORMANCE IS CHANGING 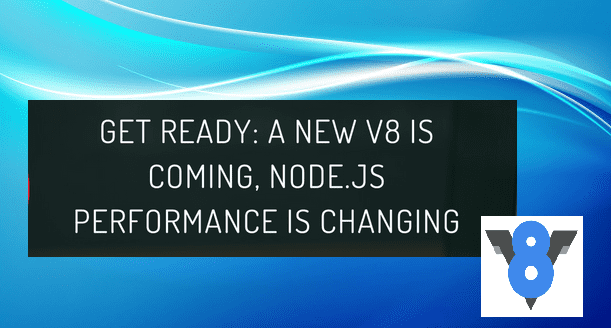 The open-source and cross-platform JavaScript run-time technology Node.js has got its game on point with the new V8 engine. In the Node.js 8.9.0 update, it now has the new V8 6.1 engine which is proving to be a significant performance booster.

In Node.js, V8 is the JavaScript (JS) engine written in C++, built for Chrome by Google for faster performance. It compiles the JS code to native machine code instead of the usual real-time interpretation. It has stayed true to the word of making JS faster with the help of Just In Time (JIT) compiler.

The New V8 Engine for Node.js

In the new V8 version 6.1 engine, Turbofan is the optimising compiler and Ignition is the interpreter.

Lately, Node.js version 8 has moved to the status of Long-term Service support (LTS). Node.js 8.10.0 LTS is the highly recommended version for users over the latest features introduced in 9.8.0. And there have been recent reports which indicate that Node.js 10 is soon going to be released with yet another improvised version of the V8 engine. It is expected to be announced in April 2018. The new V8 in Node.js 10 LTS is going to be the version 6.6 that promises some notable improvements for Promise and async/await.

Well, that’s a lot more to expect from the Node.js community! Isn’t it?