How to Install SASS

To run ‘sass’ you must install the package ‘ruby-sass’

How to Use SASS

You can also tell Sass to watch the file and update the CSS every time the Sass file changes:

If you have a directory with many Sass files, you can also tell Sass to watch the entire directory:

Using –watch to watch for any changes in files in a directory. While watching a directory, all scss files will be converted to css. In this case, the button.scss will be converted and included in application.css, but also a new button.css file will be created. This is not needed. To avoid this, we can rename the button.scss to _button.scss. There is no need to change the import syntax. This is called “Partials”. You can create partial Sass files that contains little snippets of CSS that you can include in other Sass files. This is a great way to modularize your CSS and help keep things easier to maintain. When partials are used, the compiler will not create an independent css file against the scss file. 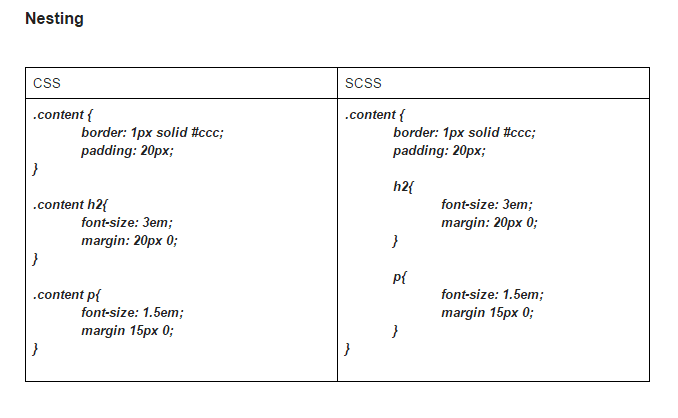 Nesting is dangerous and should be used wisely. When the number of levels of nesting increases, it may become difficult to override later. So better to limit the nesting to 3 or 4 levels. try refactoring the code, if levels are higher than that.

Sass is an extension of CSS that adds power to the basic language. Its very easy to use and even developers can write script. Extensions of SASS uses basic functions and loops in scripting languages.